Seems like the Bollywood fans are soon going to witness weddings of a lot of their favourite couples. Just recently the lovebirds Varun Dhawan and his longtime girlfriend Natasha Dalal tied to knot in a resort in Alibaug, away from the public eye. Soon a lot of congratulatory wishes poured in and one was from that of celebrity photographer Rohan Shrestha. However, it wasn’t the wish but the reply he got from the ‘Coolie No. 1’ actor which caught our attention. In the same, he was seen hinting at something brewing! For the unversed, Rohan has a lot of times made headline for dating actress Shraddha Kapoor. So does that mean marriage is on cards for Shraddha and Rohan?

Taking to Instagram and sharing a picture of the newly-weds Rohan wrote, “Congratulations VD and Nats. When you know you know! VD you’re a lucky guy!” The actor was quick to respond and wrote, “I truly am. Hope you are ready.”

Have a look at the same here: 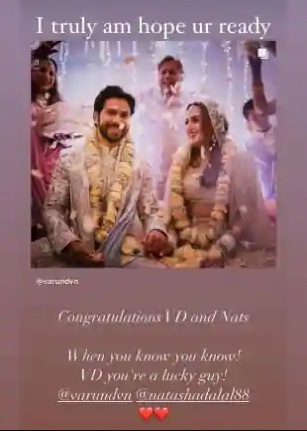 Sometime back, rumours became rife that the two are getting serious about each other and planning to take their relationship to the next level. However, the ‘Stree’ actress squashed the reports and told TOI in an interview, “Right now, I don’t have the time to think about anything apart from the movies that I am doing. And like you said, it’s only ‘buzz.’”

Not just her even her actor-father Shakti Kapoor denied all the rumours and told Spotboye, “There is no truth to it. Shraddha has no plans of marrying anyone for coming 4-5 years. She has too much on her plate at the moment and is totally focused on her upcoming projects. Her calendar is chock-a-block for the next 2 years. All this is crap.”

Taking about the rumoured couple, the two collaborated for a magazine photoshoot. After the same both Shraddha and Rohan were teased by their friends and even family, almost confirming their relationship.

On the professional front, Shraddha was last seen in Baaghi 3 with Tiger Shroff.